During a visit earlier this month to Wisconsin, we watched the state struggle with a surge in Covid-19 cases, and the reaction of a population, particularly in rural areas, reluctant to face reality.

Since the state’s Supreme Court overturned Gov. Tony Evers Safer at Home order, on May 15, it has fallen on local officials to make decisions about confronting the pandemic up to local officials. Two months later, as the number of cases climbs dramatically, some communities, are being forced to confront the issue – often against vocal opposition.

Green Bay, Racine and Superior all passed mask ordinances July 22. Green Bay is in Brown County which has recorded the third highest number of Covid-19 cases, thanks in part of an outbreak at a meat packing facility.

After the Green Bay City Council passed the mask ordinance, every member of the council, the mayor and the police chief received death threats.

In Sheboygan County, where cases are surging, the Plymouth Common Council decided to study the mask issue, punting any decision until a meeting Sept. 8. How many residents will come down with the virus in the meantime?

An increasing number of businesses are taking the lead, requiring employees and customers to wear masks. Over the last two weeks, associates at the Fleet Farm in Plymouth have started wearing face coverings, and some customers had taking the hint.

The Pick ‘n Save, a unit of Kroger, has a well-established mask and social distancing policy. During one visit, we were pleased to see an employee at the entrance tell a couple they had to wear a mask to enter the store.  The couple walked away, the man grumbling, “I guess we won’t have anything to eat tonight.”

A friend who was bicycling in the area recounted an experience he and a = friend had at an area bar.

A woman, in her 60s or 70s walked all the way around the bar to their table and berated them for wearing a mask. Didn’t they know wearing the mask would not keep them from getting sick?

True. But she missed the point. The mask keeps a wearer from spreading the disease to others – like her. And at any given time, we may be incubating the infection or asymptomatic.

We cannot help it wonder if this surge could have been avoided – or at least minimized -- if Wisconsin still had a statewide Safer at Home policy.

A flyover offers a chance think things over

The Navy’s Blue Angels flew over Chicago today, part of its America Strong campaign, a tribute to healthcare workers fighting the COVID-19 pandemic.

We were good and stayed home. We had hoped to see formation from our yard because we live less than a mile from Lake Michigan and two blocks from a Level 1 trauma center. We didn’t even hear them.

But friends who live in high rises overlooking the Lake, like Patty Coen who took this beautiful picture, did. 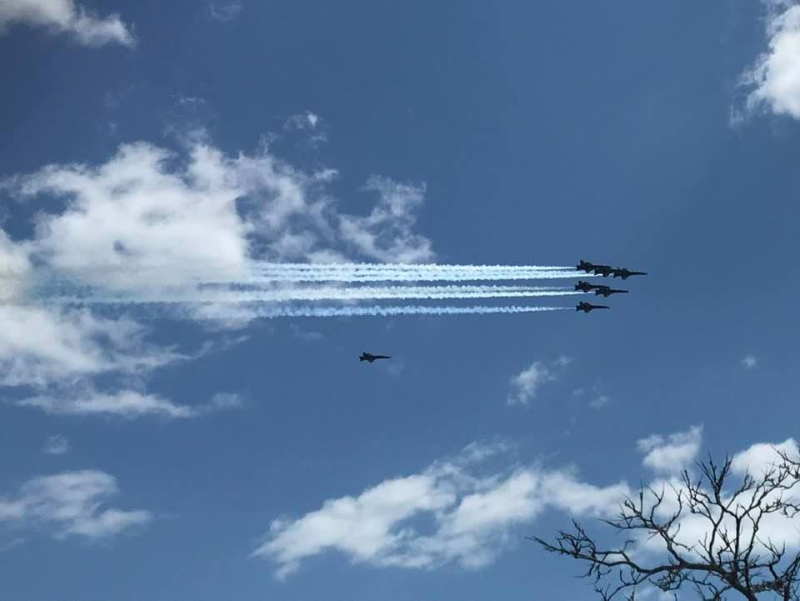 All of this is very nice. But the best way for us to pay tribute to health care workers is to wear a mask and practice social distancing. In that manner, we might make their jobs a little less stressful.

A Basketball Star Wants to Spread the Word about Lyme Disease

Unfortunately, this franchise maker is at a big disadvantage. Elena Delle Donne plays for the Chicago Sky in the WNBA, and women’s professional basketball doesn’t fly very high on the sports radar.

Maybe, based in part on a personal experience, I can in a modest way help spread the word about Lyme Disease.

Delle Donne caught national attention in the spring of 2013 when she led the University of Delaware to the Sweet 16 in the NCAA Women’s Basketball tournament. The 6’ 5” guard/forward was the second player picked in the WNBA draft, and helped lead the Sky to their first winning season and the best record in the Eastern Conference. (They were eliminated in the first round of the playoffs, but that’s another story).

This year Delle Donne and the team picked up where they left off, winning five of their first six games. She averaged a team leading 21.2 points per game. In June, Delle Donne suffered a recurrence of what is often called Chronic Lyme Disease syndrome. She missed 17 of 18 games – half a WNBA season – and the team went 5-12 without her.

Delle Donne believes she contracted the disease, a bacterial infection caused by the bite of a deer tick in 2008 but wasn’t aware of it. That’s not unusual. Deer tick bites are often missed, and when symptoms show up later, the disease is difficult to diagnose and there is no definitive treatment.

For Della Donne, the symptoms flare up periodically causing fatigue, muscle aches, migraine headaches and, this time, tremors. She went back to Delaware for rest and treatment.

And she is frustrated. Delle Donne told a local reporter for The News Journal:

"This has been a five-year fight and, unfortunately, there's no cure so, at this point, it's going to be a lifetime fight . . . It's just really frustrating to know how far behind we are with this disease."

Until more funding is devoted to understanding the disease and developing an effective treatment, it’s more important than ever for people who might come in contact with deer ticks to be vigilant.

It’s wise to wear clothes that cover arms and legs, tuck pants into socks and use a healthy dose of DEET insect repellent – basically steps taken to avoid mosquito bites.

After outdoor activities, check your body – especially under skin folds – and, as the saying goes, cover each other’s back. Doing just that led to my wife Elaine spotting a deer tick in the small of my back. The center was dark with a red ring around it. She removed the tick, we preserved it and I scheduled appointment with my primary care physician.

Since we spend a good deal of time during the summer in Wisconsin – a prime deer tick state – I had done some homework and knew antibiotics would kill the bacteria if treatment began in two to three weeks.

I saw my primary care physician no more than four days after being bitten. She prescribed doxycycline for 10 to 14 days, and sent the specimen to a lab which confirmed it was a deer tick (we’re at day eight). A following DNA test of the tick confirmed it was not carrying the Lyme disease. No need to continue the medication, although just to by safe, I took it for 10 days.

As for Delle Donne, she rejoined the team July 31. Coming off the bench, she scored an average of 15 points during the first three games (as of this writing), helping the Sky win all three in their push to make the playoffs.

The Republican who would be governor of Illinois does not know the difference between a chicken and a grouse, has a problem with math and apparently could care less about conservation.

In mid-June he stood beside three caged domestic chickens to decry wasteful spending on an effort to save the greater prairie chicken – a member of the grouse family – from extinction in Illinois. In a wire story he is quoted saying “We have plenty of chickens in our state…”

Not prairie chickens. They’re a whole different fowl and an important link to the state’s heritage.

In the 1880s they numbered in the millions in Illinois. Then farmers plowed under more and more prairie grassland – the natural habitat for this ground bird – to plant corn and soybeans. By early this year, only about 40 survived, on two parcels of land near Newton that make up the Prairie Ridge State Natural Area.

The bird’s spring mating ritual is an amazing sight to see and hear, something we went the extra mile to experience in April 2012. It wasn’t easy, but wife Elaine is an avid birder.

The mating dance begins one half hour before sunrise. We had leave our RV campsite to drive about 30 miles in pre-dawn darkness along unfamiliar roads with only a printout of directions (no GPS). Elaine said I didn’t have to make the journey, but I figured it was best if she navigated and I drove. Because I grew up in Iowa, rural roads don’t intimidate me, even in darkness.

We arrived at the Illinois Department of Natural Resources “office” – a modest old farm house – just in time. In part because it was the middle of the week, we were the only visitors. (On weekends during mating season getting into special blinds requires reservations.) The two DNR employees led us to scopes at the edge of the field. What we saw made it worth the early alarm clock.

I don’t have the photographic equipment to capture the mating dance, but here in a YouTube post is an example of what we saw and heard. Turn the audio all the way up. The best “dances” are at 2:45 and 3:45.

Those are the endangered species Rauner showed so much contempt for. His target was the cost of flying 91 prairie chickens from Kansas to enlarge the Illinois population and increase its genetic diversity.

Here’s the big picture that Rauner either ignored or didn’t bother to understand.

This is the first year of a planned three year $519,230 program to bolster the state’s prairie chicken population. The U.S. Fish & Wildlife Service provides $337,500. The state’s share is $181,730, most of which goes toward ongoing work at the natural area and DNR salaries. Both the state and federal dollars come not from income or sales taxes but from outdoor enthusiasts through hunting and fishing licenses and other user fees earmarked for conservation.

In other words, the dollars are coming from people who appreciate the need for conservation of our scarce, often threatened natural resources. If Rauner wins the November election, we can only hope he respects this covenant – and does not become the governor who killed off the last of the  state’s prairie chickens.