Chevy and Honda lose to both Ferrari and Ford

The weekend of June 19-21 was slated to be the high point of the racing season at Road America.

The world class road circuit, nestled in the rolling Kettle Moraine hills about an hour's drive north of Milwaukee, has become a traditional stop on the IndyCar circuit, the pinnacle of open wheel racing in the U.S. The track is only about 10 miles from our Wisconsin getaway property, so the 2020 dates have been circled on our calendar for months. Drivers love the four-mile, nine-turn course with significant runoff areas. Fans love the place. The pits are accessible and the smells of roasting sweetcorn and broiling brats tempting stops at the concession stands. For Chevrolet and Honda, the only two engine suppliers, and the teams the challenge is to adapt to a long course with significant elevation changes.. Thanks to pandemic-related closings, IndyCar was forced to tear up its calendar. Road America was suddenly faced with an empty track on a premium week. (The track will host an IndyCar doubleheader July 11 and 12.)

So, the track opened its gates to race fans June 19 for a Friday Night At the Movies, featuring – how appropriately – the 2019 award winning Ford V Ferrari. The high whine of the Chevy and Honda turbocharged engines would be replaced the more guttural roar of 1960s-era Ford and Ferrari engines.

Road America got a good turnout. The cars were carefully spaced, one for every two spots. Pull up a lawn chair, sit, sip, watch the sunset and then enjoy the movie. 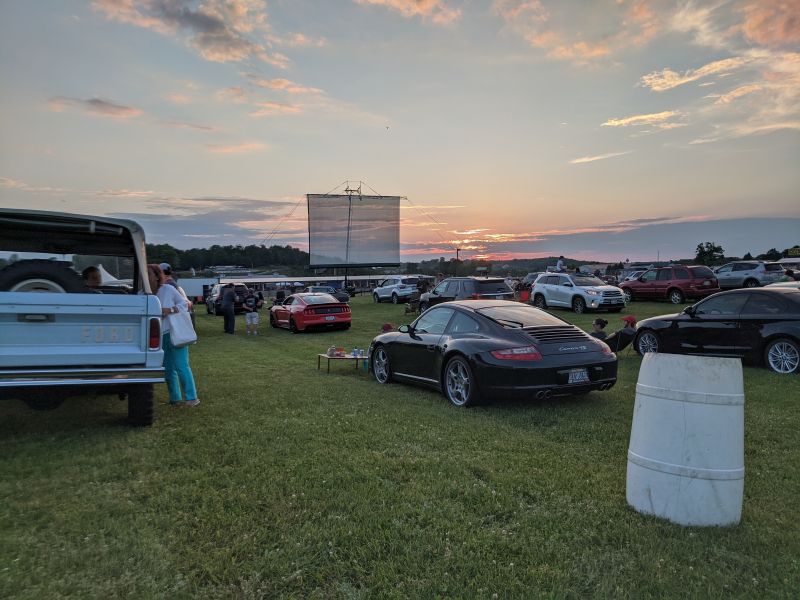 In a nutshell, spurned in a bid to buy Ferrari, Ford executives, decided to beat Ferrari at its own game by winning the most prestigious road race on the planet, the 24 Hours of Le Mans in 1966 – and do it in three months. Ferrari had won the race six years in a row and Ford did not have a serious racing program. So, it turned to Carroll Shelby, who had won Le Mans for another manufacturer in 1959. When a health issue forced him to stop racing, he turned to building race cars. Besides racing, the film is full of corporate intrigue and has a nice family dynamic. (More here: https://time.com/5730536/ford-v-ferrari-true-story/)

But this blog is not about the movie, it's about the setting and nice gesture by Road America. (Kudos to the person who came up with the idea.)