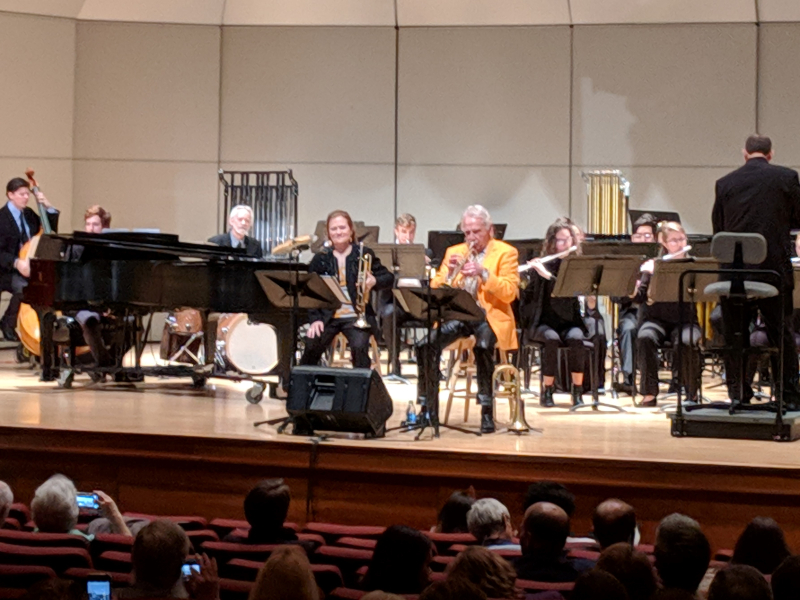 Doc Serverinsen, readers of a certain age will remember, was the music director of NBC's Tonight Show Band for 25 years. Some may remember him as much for his often-outlandish dress as his amazing musicianship.

In Knoxville, TN, on our annual spring RV, Elaine caught a mention on the morning news that Doc was going to perform that night on the University of Tennessee campus.

Too great an opportunity to miss.

Since we had never set foot on the campus, finding the James R. Cox Auditorium was an adventure. We found our way to a back door used by the student-musicians. As we exited a stairwell, there he was. Doc, dressed in colorful shirt and jeans, just standing there all alone.

I couldn't resist stating a conversation that took us back 55 years – when he was 36 and I was 21 – to a cold February night in Moorhead, MN (a twin city with Fargo, ND).

I was a member of the University of Iowa Symphony Band (principal bass clarinet) and Doc, principal trumpet of the Tonight Show Band but not yet its director, was Iowa's guest soloist.

The occasion was the annual Northwest Band Clinic, organized by Nels Vogel, a big promotor of bands and music education who owned a music store. To be invited to perform at his clinics was a high honor for any band.

The performance is seared in my mind as the highlight of my college playing days: 8000 people, including band members and their leaders, packed a venue on the Moorhead State campus. When they turned down the house lights, I could no see the back wall. And then there was the honor of accompanying Doc in his usual awe-inspiring performance.

Doc remembered the extreme cold. He told the story a one of his visits to Moorhead – there was more than one – when the temperature was 38 degrees below zero. He was tempted to step outside the hotel to experience the extreme cold. Maybe a bit head strong, he decided to ignore suggestions it was not a good idea and opened a door. He retreated after one step outside.

Doc also paid tribute to Fred Ebbs, the director of bands at Iowa, for his stellar reputation for molding a group of musicians – us – into an outstanding ensemble.

Doc teams with his partner, Cathy Leach, professor of trumpet at the University of Tennessee. With his nickname and her doctorate in music, they call themselves "Pair-A-Docs" and feature a wide-ranging repertoire: classical, jazz, Tonight Show standards.

When they entered the stage, the finale to a three-band concert, Doc, had changed to a UT orange blazer, and black leather pants – true to his flare of colorful outfits.

At 91 one, Doc can still hit the high note and play an expressive trumpet. The two played off each other and at one point the eight trumpeters in the UT Wind Ensemble joined in fill the auditorium – to the delight of the audience. Their encore, the schools fight song, brought the house down. It had special meaning because the day before their popular basketball coach had decided to stay.

In a way, Doc hasn't changed. Just like 55 years ago, he is dedicated to his trumpet and spends the hours of practice it takes to play at the top of his game. He also performs regularly, an ambassador for great band music and an inspiration for students with a passion for music.

The comments to this entry are closed.